The “Legal and Social Mapping” was conducted by Transgender Europe’s Transrespect versus Transphobia Worldwide (TvT) research project in close cooperation with activists and experts from all world regions. A comprehensive 30-page expert questionnaire developed by the TvT project’s research team and reviewed by more than 15 researchers and activists from all six worlds regions was distributed to over 100 international activists and experts, who provided detailed information including comments and explanations on the specific situation in the respective country.

The focus was on collaboration with trans activists who were able to draw on their expertise regarding current political processes and actual legal and social practices, rather than with scholars or lawyers as such.

6.) good practices (by governments/states, the trans movement and its organizations, or allies)

A key characteristic of the TvT mapping is its attempt to map not only existing laws, but also actual legal practices and proposals for legislation, thereby seeking to increase its relevance to activists and human-rights actors. The TvT tables are also designed to clearly show the important differences between legal criminalisation and actual prosecution of gender-diverse/trans people. We made this distinction because there are countries where there are legal measures that specifically target gender-diverse/trans people, e.g. laws that criminalise ‘so-called cross-dressing’, which are no longer enforced. In contrast, there are also cases where prosecution occurs without a legal basis or based on laws not created to target gender-diverse/trans people such as anti-prostitution, loitering or nuisance laws. The tables thus aim to provide a comprehensive understanding of the legal situation beyond the existence of legal measures as such.

The tables furthermore list the existence of alternative practices to medically supervised hormone therapy and gender reassignment treatments, such as acquiring hormones on the black market without medical supervision or applying industrial silicone without medical supervision. These ‘alternatives’ exist in countries where trans-specific health-care is not provided, in cases where gender-diverse/trans people do not meet the requirements for medically supervised treatment or when funding for hormone therapy is not provided and it is easier to access hormones in pharmacies without prescription. These ‘alternative’ practices can lead to serious health problems and even death.

At present (September 2015) the TvT Legal and Social Mapping encompasses 119 countries. This data build the basis for the maps and the comparative country data in the TvT databank (Link to TvT databank).

The TvT team also created leaflets showing the Legal and Social Mapping data in PDF form, which can be used by activists as advocacy tools.

You may find the leaflets as PDFs for download here (Link to Resources-LSM). 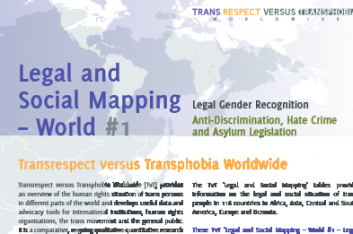 Launch of Spanish and Turkish Translations of TvT Research 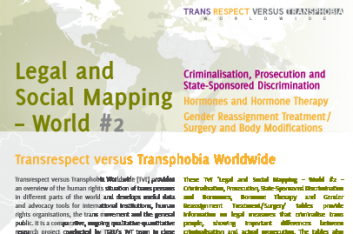